It's taken me a while, but it occurred to me the other day that my friends page has been moving really slowly for the last couple of weeks. Today, I found out why: I have been removed from the adult adiml community. Why, you may ask? Well, it wouldn't be hard in that community - the moderator is like a woman with a perpetually raging case of PMS - but it wasn't something I did. It was, rather, something I didn't do. I didn't post a picture of myself having a bath or shower. Yes, that's right.

See, the moderator of the community, despite acting like a seriously pissed-off female, is actually a dude. A dude that has somehow managed to get a fair amount of people to fangirl him and, as such, want to show him their boobs. In the community, there were weekly themes, as well as "instant challenges". More often than not, they involved nudity. Even if the theme itself didn't specifically mention nudity, he would often do instant challenges such as "Post a photo of what you're wearing RIGHT NOW (and if you're not wearing anything, well that's fine lolololol". We had to vote on the weekly themes, and there was usually always a nude option. There was a scavenger photo hunt recently, and one of the items to "collect" was boobs. Getting the picture?

Anyhow, I had been voting for stuff I wanted to participate in, and I had never selected any of the nude ones. However, the last one I voted for was different to usual - instead of there being about 5 options, there were only 2: Taking a picture of yourself in the bath/shower, or your pet peeve. They were both shit, in my opinion, but I chose the bath/shower one. And yes, I had no intention of posting a photo of myself bathing on the internet, but you know what? Neither did the fucking moderator. Anyhow, after making people vote and seeing the bath item win, the moderator then backtracked and said he thought no one would choose it, and made the weekly theme BOTH of them. Then he posted and said he would be removing people from the community who voted for the bath/shower item and did not participate. I really hope he removed himself from the community as well, but that's wishful thinking.

I was toying with the idea of leaving the community anyway, because of his attitude toward the members, but I wanted to stay because of the photos. You have no idea how much of a douche this guy is - he gives people the option of saying they don't like the community, or an idea of his, but if you dare select that option he singles you out and ridicules you for it. If you dare to ask a question or want to clarify something HE thinks is simple, he'll do the same. He's kicked people from the community for asking questions like "Why do you give us an option to give you feedback if you don't want to hear it?" and "This scavenger hunt item is a little difficult for a lot of us, could we have a different option?". Seriously.

bobbysan - you can go and fuck yourself, you sleazebag hypocrite cockface, and have a cry about yet another person insulting you on the internet.

Anyone else know of any similar communities I can join that aren't run by a tyrannical cockmunch?

Got a new haircut today - it was time for a change. 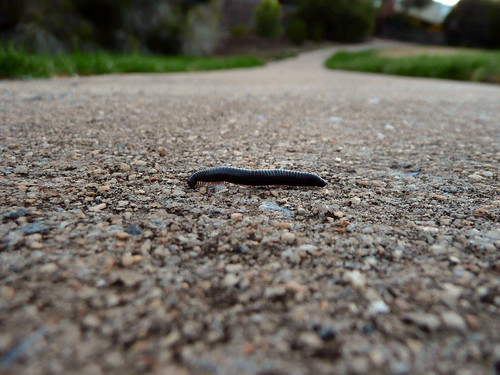 It would appear that Luke has eaten my bacon. I mean, technically it wasn't exclusively my bacon, but that doesn't matter.

This can't come to South Australia soon enough, if you ask me. Although it probably won't work, it's a step in the right direction.

I escalated my Paypal dispute to a claim after I worked out that the tracking number was definitely dodgy. This morning, I received many emails from the seller - isn't it funny how they start contacting you as soon as you make a claim?

Anyhow, they said that the item could take 21 business days to get to me (and here I'm wondering just how they sent it? Carrier pigeon?), and that they want me to close my Paypal claim and deal with them directly. They also admitted the tracking number is fake, and that the method of shipping they chose doesn't have a tracking number.

They also updated the Unpaid Item Dispute with Ebay, saying that apparently when I dispute the transaction with Paypal, it reverses my payment and puts it on hold, so they class me and not having paid, which is ridiculous as far as I'm concerned.

They sent all these emails to my non-Paypal email address, by the way. Will Paypal be interested in them at all? I feel with them admitting that the tracking number is bogus, AND asking me to close the claim I should be passing it on to someone. Any advice? I've never had to deal with a seller like this before.